A friend and I were recounting last week the 'mad' things we did when new to motherhood. Both of us resolutely baked. Maybe the so called nesting instinct was still with us from prior to the birth or, more likely, just a barmy idea during a time when there was little 'free time' - and what time there was, was probably experienced in a blur. I was cupcake baking mad - I had to make them. So we laughed at ourselves and agreed we were bonkers. So more than a year on and with the Seville orange season upon us, I decide to make some marmalade. Initially not just 'regular' marmalade, but the dark version as per Delia's Winter Collection. Having bought the ingredients I then stole 2 minutes to check the recipe - a downfall of mine never to read it through first - only to find it takes 2 days!! What was I thinking?? I vaguely remember undertaking the same task last year and doing another 11pm special in trying to get the mixture to set. Actually this year's effort ended up being a similar time frame. All I remember from last year is disaster and Richard coming to the rescue......

So there must be some sanity within me as I ditched the plan to make the dark marmalade and set about to make just the normal. I haven't pain stakingly cut all the peel into strips I am afraid Delia - life it too short. The whizzer does an equally good job and I also had two fish pies to make that evening........(errrrr...) 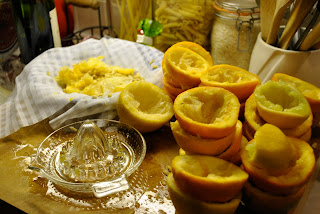 Squeezing the juice and collecting the pips and pith 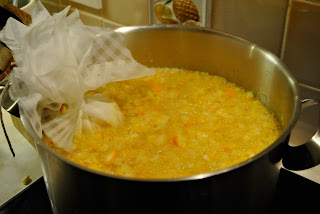 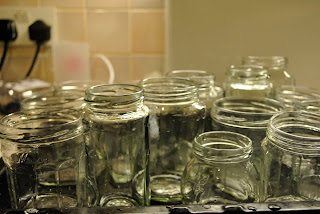 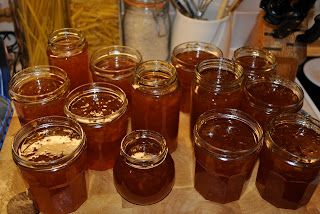 Sterlised jars then filled (with the odd burnt finger) 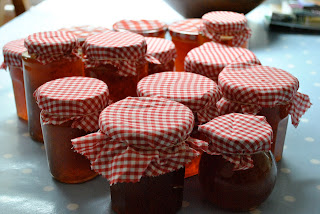 If anyone is reading this locally and would like to sample a jar - please do leave a comment!
Posted by Cupcake at 13:41

I had some of your dark marmalade for breaky on Thursday. Was that this new stuff? It was really good and I forgot to steal the jar...

No that was the old batch - and meant to give you a jar of the new to take home!