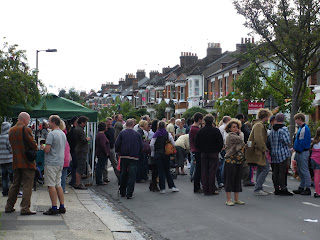 Yesterday was the annual Upland Road Street Party. The top half of the road was closed to cars which meant the children could run around - in and out of people's houses - and 'events' took place in people's driveways. We arrived to a live band playing away - Isobel kicked her feet and rocked away. 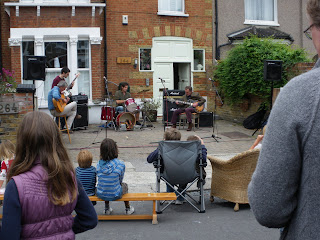 For the second weekend running, she watched a Punch and Judy show and there was an array of home cooked food. We took fairy cakes which were demolished in a flash. It was lovely the way the kids could run around, have their face painted and there was a ping pong race with the kids running down the road after a bag full of balls (all marked with house numbers). Not sure what the winning number won! 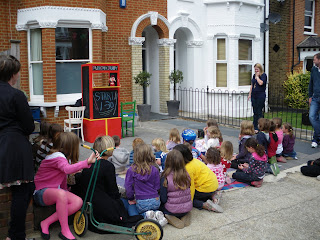 Last year we - well, I watched heavily pregnant - were gutting the house getting ready for the central heating to be installed and saw the party going on up the road - so it was nice to be part of it this time around.
Posted by Cupcake at 20:16